In the 60`s begin the Art known as the Japonisme that begin in Western Europe mostly in France. Then in the mid-1800s  the west began using this techqnie also , so there was a lot of places that where using Japonisme  Art. This type of Art was inspired from western Art in the 19 century  , two years after The Crystal Palace was build. There was a shop that was called The Chinese Gate and he used to sold Japanese prints that where made on wood blocks made by artists like Van Gogh, Mary Cassatt, Gauguin, Whisler, Degas, Gustav Klimt and more of the same style. 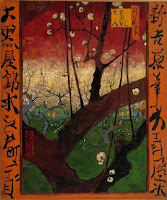 Many of the Artist where traveling from France to Japan so they can express there painting trough real life. By this there where a lot of media involved by magazines, news-paper and more.This type of Art was very popular and many painter used to paint the background with this style or all the scene.

There painting used to have a distinction of depth and not faded shading. One of the artist that used this type was Manet that was inspired by the Japanese Art. This was made so it can appear a three- dimensional. They also used to make wrong symmetry and emphasize on flatness.
I think that  the most influence part of this element is how the artist  emphasis on  nature and recording it in a way that the painters never made. 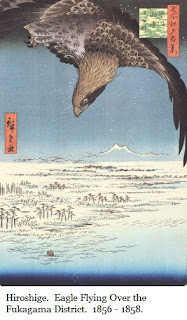 One of the most important painting and the one that I like the most is this painting that is The Eagle Flying over the Fukagama District. This is a scene of winter time that  captured a bird  that has bright blues and whites colors. There is also snow-topped and mountains in the back  made a lines. He emphasize on the flatness on the lake to show that the lake is frozen  and made the top darker. He made this effective with the tones of blue but mostly amazing part for me is the part of the top where he made a lot of dietel on the eagle that catch your eyes for the first time you see it. I think that as a hole painting it is beautiful.

Here we can see that Japonisme Art is not only made on wooden blocks but also on ceramics. Thing that are used in every day life painted on objects as 3-D form.